UK Medical Charities Join Together to Provide Training Videos for Ukraine War Injuries, Empowering Citizens to Potentially Save the Lives of Others

21st April 2022
A series of first aid training videos have been released today by a coalition of UK medical charities and senior trauma doctors to help civilians save lives in the war in Ukraine. 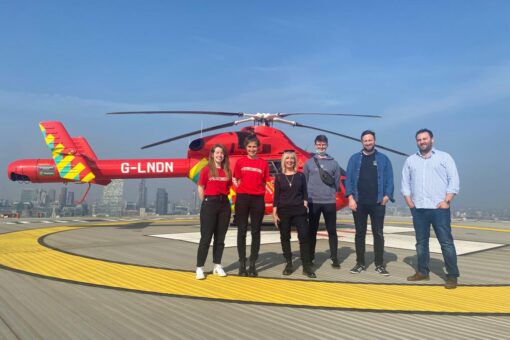 The videos, produced by film and production company Objekt, were filmed at London’s Air Ambulance helipad base, and show doctors and paramedics demonstrating techniques to instantly treat injuries of the kind that will be found on the streets of Ukraine.

The series of videos demonstrate simple lifesaving first aid skills that will allow civilians in Ukraine to potentially save the life of their fellow citizens.

Using simple techniques and readily available materials, the videos show what to do if someone is bleeding from a gunshot or sharp object such as shrapnel, what to do if someone has lost a limb, has sustained a burn, eye injury. There are also videos on how to stop serious bleeding by creating a tourniquet and how to put someone in the recovery position if they are unconscious.

It is hoped that by knowing what to do, citizens will be empowered to provide key pre-hospital care and reduce the number of casualties.

All videos can be downloaded at www.civilianfirstaid.org

Doctors Simon Jackson, Nick Rhead and Tom Kirschen who came up with the idea and organized its grassroots said: “The charities and doctors involved in this partnership are changing the way first aid training is delivered in conflicts. As we’re seeing in Ukraine, civilians are on the frontline, and this format means people without prior training will be able to equip themselves with simple life-saving skills. By harnessing the immediacy and shareability of social media, we hope this information will reach the greatest number of people and save lives.  These videos can be stored, shared and used as a resource at the point of care, which understandably is something traditional first aid teaching cannot achieve.”

London’s Air Ambulance delivers an advanced trauma team, made up of a doctor and paramedic, to bring the hospital to the scene when there is no time to get to hospital. It has a world class reputation for delivering clinical innovation and pioneering treatment at the roadside and is known for using new technology and treatments to bring the most innovative care to the people of London.

StreetDoctors is a violence reduction and prevention charity that empowers young people affected by street violence to save lives if they see someone injured and learn about the consequences of violence. Emergency first aid training is delivered across the UK through a network of young student and professional doctors, nurses and paramedics who work with youth sector organisations such as youth groups, criminal justice organisations and schools.

citizenAID is the initiative of four UK civilian and military trauma specialists whose aim is to improve public resilience from deliberate attacks. Launched in 2016, citizenAID has promoted a simple, logical system of immediate actions to enable the member of the public with no medical training to act and save a life. It is designed to guide the public to react safely, to pass effective messages to the emergency services, to prioritise the injured and to give life-saving care. Built on tried and tested principles that have been used by individual soldiers to save lives following comparable injuries sustained in the combat setting, citizenAID transfers the same medical knowledge and skills to the public so that they can help in these incidents. These skills are essential for those caught up in conflict zones.