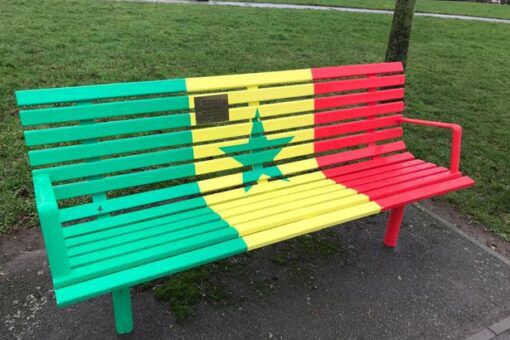 A group of young people fundraised over £3,000 in memory of their friend Babacar Diagne, who was tragically murdered by strangers two years ago in February 2020.

Of the funds that Babacar’s group of close friends raised, £700 was spent on a colourful bench in his memory for their local park, and they donated the rest (£2,333) to StreetDoctors to run emergency first aid training in local schools.

Aged just 15 years old, Babacar had recently moved from Sutton Coldfield near Birmingham to Coventry when he was stabbed to death by teenagers – he was just in the wrong place at the wrong time.

His murder shocked the community he left behind in Sutton Coldfield; tributes came from his former school saying how much Babacar was loved. He was a friendly and kind boy with a bright future ahead of him.

I wish Babacar was still here, but we cannot change that. The training that the young people will receive [from StreetDoctors] may prevent another tragedy and stop other families and friends feeling the terrible loss we all do. Nobody should want to hurt another person, but least of all children and young people. I hope these workshops help to spread this message.

Teaching Assistant who helped his friends raise the funds

Babacar was unique, he would show up unexpectedly and just make everybody laugh. I’ve got great memories of him that I’ll never forget, and it will always break my heart to know he was taken so young in such a horrific way. I hope young people receiving the training from StreetDoctors really take in what they’re being told because just to save one life in my friend’s name would mean the world to me. StreetDoctors teach young people what to do in the event of a stabbing or a fight. I think that is so important because with the rate of knife crime in this day and age it’s not an uncommon occurrence for violence to take place. I hope Babacar is proud of everybody involved.

StreetDoctors trains young people affected by violence in emergency first aid skills, so they can save a life if someone has been stabbed or knocked out. They also empower young people with knowledge of the consequences of violence, so they can make more informed decisions about keeping themselves and others safe.

The donation from the teenagers will form part of the Babacar Diagne Memorial Programme, named in his honour, which will enable StreetDoctors to deliver at least 10 sessions to over 150 young people in two schools in the Birmingham area: Stockland Green School, Erdington and John Willmott School, Sutton Coldfield.

The Minister for Education, Baroness Barran, recently spoke at the House of Lords about the importance of educating young people with first aid skills at school, especially training on dealing with stab wounds for young people affected by violence.

We are so delighted with this fantastic fundraising effort by young people who were Babacar’s friends. We are honoured that they chose us, and will be utilising our local Birmingham young healthcare volunteers to deliver our vital lifesaving training to empower local young people.

The StreetDoctors training will be delivered by young healthcare students from Birmingham University, who act as role models for young people affected by violence – showing them that positive futures are possible. As peers from the local area, they carry important messages: that young people who know how to do first aid in a violent incident can save lives, and that the medical consequences of violence can be severe even for the smallest of stab wounds.

It’s a huge honour to receive the donation in Babacar’s memory and to know that more teaching sessions in the Midlands can be made possible thanks to the people that loved him. Our training helps to start conversations in the community and provide potential bystanders with lifesaving skills. This is more important than ever and we’re grateful to be doing that through the Babacar Diagne Memorial Programme.

After completing StreetDoctors training 93% of young people say they know what to do if someone is bleeding. The charity aims to double the number of at-risk young people they train in 2022 to 4000, as the impact of the pandemic is keenly felt amongst vulnerable young people across the UK.

If you would like to support the Babacar Diagne Memorial Programme to enable more lifesaving sessions to be delivered in schools in the Birmingham and Coventry area, please donate here: https://www.justgiving.com/fundraising/babacar-diagne-memorial-fund

This story has been reported on by the Birmingham Mail here.